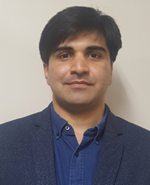 FAHEEM KHAN was born in Bannu, Pakistan, on August 14, 1988. He has got his bachelor degree in electrical and communications engineering from UET Peshawar, Pakistan in 2010. He was appointed as a lecturer at the same university and served there for two years. He taught different courses mainly focused on computer programming, signal processing and digital design. In September 2013, he has got a grant from Pakistani govt. for pursuing his PhD in South Korea. He received the Ph.D. degree in electronics & computer engineering at Hanyang University, South Korea, in 2018. His research interests include impulse radio UWB radar signal processing, computer vision, and localization, tracking and gestures recognition. He has published several conference papers and articles in reputed journals. He has also applied for several local and international patents. In the year 2020, he successfully got an individual fellowship Marie-Curie post-doc at University of Brest UBO, France. He has worked on multi-human detection, localization and collision avoidance between human and robots inside industry 4.0. He has also worked on bio-signal processing through impulse radio UWB radar.  The main goal of the bio-signal processing was to get accurate heart rate of a driver inside a vehicle. He has published one paper during his post-doc at UBO France. The other two papers are under submission. His future plan is to build a start-up based on his knowledge and skills that he has acquired during his research career.