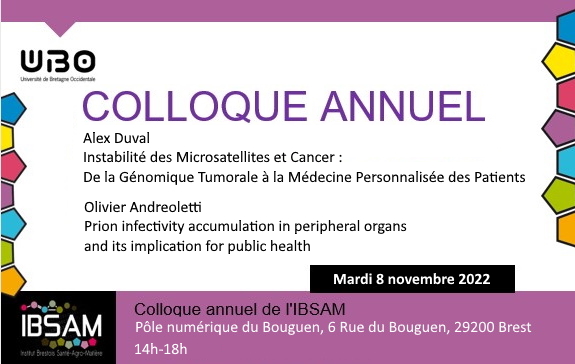 Our team entirely focuses its research activity on the study of cancers with MSI (for Microsatellite Instability) that arises due to defects in major genes of the DNA mismatch repair (MMR) system in cancer cells. MSI was first observed in inherited tumors associated with Lynch syndrome and later in sporadic colon, gastric and endometrial cancers, where they represent 15-20% of cases. Recently, MSI has been commonly detected in a broader panel of tumor types (0.1-5 % of cases). MSI is now considered as a common cancer phenotype, with approximately 15,000 and 700,000 new cases per year in France and worldwide in pan-cancer. Very significant advances have been recently made worldwide in the personalized treatment of MSI cancer, notably by using immune checkpoint inhibitors (ICI). Nevertheless, several medical needs remain unmet for patients.

During my talk I will insist on recent results and ongoing projects we develop in the lab to understand the MSI-driven tumorigenic process and the way how this mode of genomic instability is able to transform cells basically. Besides, I will show how these knowledges can be used in clinics (i) to improve the diagnosis of MSI in pan-cancer; (ii) to better predict resistance of MSI cancer to treatment; (iii) to improve the conditions for diagnosis of familial predisposition to MSI cancers, i.e., detection of Lynch syndrome (LS) and CMMRD (for Constitutive MMR Deficiency).

Sporadic Creutzfeldt-Jakob disease (sCJD) is the most frequent form of prion disease in humans. It is generally considered a spontaneously occurring prion disease in which the infectious agent remains confined to the nervous system. In contrast, in vCJD, an acquired form of prion disease consecutive to the exposure to the BSE agent, infectivity is known to accumulate in tissues others than the nervous system, notably the lymphoreticular system. In a first series of experiments, we systematically assessed the distribution of prion infectivity in the peripheral tissues and plasma of sCJD and vCJD patients. Prion quantification was carried out by bioassay (in PrP transgenic mice) and/or by in vitro amplification (PMCA). Surprisingly, we found that, like in vCJD, prions are largely distributed in the peripheral tissues of sCJD-affected patients from various subtypes. Although strong inter-individual heterogeneity exists between sCJD-affected individuals, the overall infectivity levels observed in sCJD were not significantly different from those found in vCJD patients. These findings naturally raise a question: how early prion infectivity starts accumulating in peripheral organs in sCJD? To answer this question, we propose that studying certain forms of genetic CJD could represent an interesting approach. Transmission experiments using CJD cases associated with E200K mutation demonstrated that these form of gCJD are caused by the same strains than sCJD. They also indicated that both E200K gCJD and sCJD-affected patients display the same infectivity distribution patterns in peripheral tissues. These results support the contention that the study of mutation E200K carriers could allow major advances in the understanding of CJD disease pathogenesis in humans. In parallel to this work we developed a bioassay model for sensitive and specific detection of A seeding activity. In this model the end point titration demonstrated the presence of A seeding activity up to 10-12 dilution of 10% brain homogenate from an Alzheimer affected patient. The transmission of a panel of isolates originating from patients with different clinical course of disease revealed a similar patterns of A deposition in the brain of inoculated mice. However, according to patients, differences were evidenced in the kinetics of A deposition in the brain of inoculated mice. The model we developed could represent a useful tool to assess the presence of Ab seeding activity in peripheral tissues and body fluid from patients affected with Alzheimer’s disease. It also offers an opportunity to investigate the existence of a strain phenomenon in this clinically polymorphic disease.